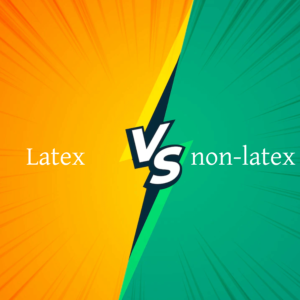 Learn Types of Condoms by material:

Latex, lambskin, polyurethane, and polyisoprene are the main components of condoms.

It just so happens that latex condoms are the most readily available variety since they are both inexpensive and simple to produce. Numerous companies produce condoms made of latex, and these products come in a wide variety of sizes, hues, textures, and even flavors. Nonetheless, this is not the case with all condoms.

Lambskin condoms, so named because they are crafted from the intestinal membrane of a lamb, are the world’s first and oldest condoms. Lambskin condoms are great for preventing conception, but they are not efficient against sexually transmitted diseases (STDs) due to their small surface pores. Those with latex allergy may find more comfort in using polyurethane condoms, which are essentially comprised of plastic. They may be more likely to come off as they are less elastic than latex condoms.

If you’d rather learn more about the many condom options, you can keep reading.

You may get condoms made of latex in India if you shop online.

To put it simply, latex is simply rubber and rubber is simply latex.

Latex is a chemical made up of a variety of caticifers, which are organic molecules made by certain plants in specialized cells. Each plant will require a unique amount of composition. Only one tree species, Hevea brasiliensis, is responsible for the vast majority of the world’s natural rubber production. South American in origin, this H. brasiliensis is now widely cultivated in Asia, with India being a major producer. Natural rubber can be stretched to seven or eight times its original length due to its unique physical features of extensibility and tenacity.

Condoms made from lambskin:

Animal-Friendly Condoms Made From Lambskin

Unlike latex condoms and polyurethane condoms, lambskin condoms are crafted from the intestinal membrane of sheep, hence the name. Lambskin material has microscopic holes, albeit they are not large enough to enable the passage of sperm, therefore they are not as effective as latex for preventing viral STDs like HIV and herpes. However, they are good for preventing pregnancy. Therefore, they are not suitable for usage as a means of preventing certain illnesses.

Though condoms made from lambskin are unavailable, many other options exist. Plus, Pordeshi is the most discreet place to buy condoms online.

Condoms made of polyisoprene and polyurethane:

The condom business responded to reports of allergic reactions from users of latex and latex-free condoms by developing latex-free polyurethane and polyisoprene options.

Exactly what do polyisoprene condoms consist of?
What we call natural rubber, often known as latex, has the chemical term polyisoprene. Synthetically generated polyisoprene is used to make condoms since it is pure and unadulterated by other chemicals.

Are polyisoprene condoms right for you?
Allergy and sensitivity to latex is a common problem among men.

If a man suspects his lady has a latex allergy or sensitivity, he should avoid latex products.

Anyone interested in trying something other than the standard condom. Polyisoprene condoms come in a wide variety of styles and shapes.

The typical latex condom is not the only option for many people, including those who are not allergic to latex. Polyisoprene condoms, a novel synthetic material, replaced latex ones. Polyisoprene is simply a synthetic latex, and as such, it displayed many of the same characteristics as natural latex condoms. It was seen as a savior by latex enthusiasts since it lacks the allergic proteins found in natural latex.

Despite the fact that the market has been raving about the new polyisoprene condom due to its superior performance, polyurethane may still be a perfect option for many couples. Polyurethane condoms are more durable than latex condoms while also being thinner and more comfortable to wear. Body heat is transferred more efficiently using polyurethane condoms, which promotes enjoyment.

In November 2008, the Food and Drug Administration gave its blessing to polyisoprene condoms for use in preventing STDs and unwanted pregnancies. The polyisoprene used in SKYN condoms is manufactured in a lab and undergoes a unique treatment to form crosslinks, which greatly increase the condoms’ stretchiness. After being stretched, the SHYN condoms are able to return to their former shape thanks to this unique treatment. SKYN condoms have several advantages over polyurethane condoms:

If you or your spouse suffers from a latex allergy, you will be relieved to know that SKYN condoms are a perfect alternative to standard latex condoms. Despite the fact that many people are comfortable with latex condoms, many more choose to use SKYN condoms due to the enhanced sensitivity and novel experience they provide.

According to the statistics provided by various authorities, it is clear that all four varieties of male condoms provide statistically equivalent protection against pregnancy. Your budget, availability, how they feel, openness to explore, and beliefs about animal welfare are other relevant considerations. I hope you enjoy putting them to use.

If you want to give them a try without anyone knowing, you can buy condoms from a reputable internet vendor like Pordeshi.

You might be surprised to learn that casein, an animal byproduct, is used to make the vast majority of condoms on the market. Casein is the main protein in milk and is a byproduct of the dairy industry. One popular condom brand explains how casein ends up in condoms.

Multiple procedures are needed to transform raw latex into finished condoms. Casein is used as a “helping hand” in the rubber-making process. Most condoms are not vegan since most manufacturers use animal products to make the latex more pliable and flexible.

Casein may be present in nearly all latex condoms. Since Polyisoprene condoms don’t contain latex, which contains casein, vegans can feel safe using them. No negative side effects have been established or reported by users. In this sense, Kamasutra skyn condoms are similar to vegan condoms.

Lastly, a friendly reminder on condom use: