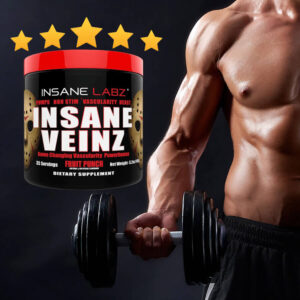 The supplement manufacturer Insane Labz has introduced Insane Veinz, a stim-free pre-workout also known as a pump supplement.
The supplement is called “Insane Veinz” because of the company’s claims that it can improve one’s vascularity.
Pre-workout supplements that don’t include stimulants are gaining popularity because of their convenience and potential benefits to the mind-muscle link, such as the ability to be used whenever desired.
Here, we’ll discuss this supplement in detail to help you decide whether or not to purchase it.

The pre-workout pill Insane Veinz, made by Insane Labz, contains no stimulants. Its intended use is to improve vascularity, energy, attention, and muscle pump. It’s an amino acid, mineral, and herb powder supplement.

There’s agmatine sulfate in there, so they say you’ll have vascularity like you’ve never seen before. It should also mix well with other pre-workout supplements, such as their “I Am God” pre.

Pump Serum and Preseries Bulk Stim-Free are two examples of stim-free pre-workouts that nevertheless provide at least 16 grams of protein per serving. This suggests that the dosages or substances in those other supplements are at least five times higher. Let’s get the details on how this product was made and what doses were used.

There are six main components to the formula:

They don’t disclose the amounts of various substances, which was the first red flag. They ‘guard’ their recipe in this way so that other businesses won’t be able to copy their success. But now we can’t see the entire amount they added, which is critical for evaluating the supplement’s efficacy and making comparisons to others. All of the components were chosen for their ability to increase production of nitric oxide.

Improved exercise performance and increased blood flow may both benefit from the use of agmatine sulfate. Nitric oxide levels can be raised with the help of beet root, according to research. So that your body can retain more water, which will aid in achieving a greater muscular pump, they added sodium. This doesn’t look like a stim-free pre-workout at all; it looks more like a nitric oxide enhancer. Although increasing vascularity is the product’s primary goal, it is not an effective pre-workout.

OUR OPINION ON INSANE VEINZ:

We love the way they appear, but the recipe and dosages are way off. They appeared to have made a serious effort to design a premium product that would promote improved blood flow and physical vitality. Despite the fact that they were severely lacking in crucial components.

It would be a much better buy if they decreased the price to the $25–$30 range. To clarify, I’m not saying that. If you upgrade your pumps, you will notice a difference, but the cost is too expensive for the benefit you receive.

Was it true that it caused us to have crazy veins?

Now, vascularity is affected by several variables, including as one’s genetic makeup, level of body fat, mineral and carbohydrate intake, and so on. Is that the case, then? Do you find that you’re more vascular than before? Incorrect; you must still maintain equilibrium in all those areas to achieve vascularity. No amount of Insane Veinz or any similar supplement will help you with that.

We put the product through its paces numerous times, and each time we felt no more energized. There was, however, a rise in the number of pumps. Pump Serum by Huge Supplements is a far superior alternative. It can be used as a non-stimulant pre-workout and has a serving size that is three times larger.

Insane Veinz has potential as a high-quality muscle-pumping supplement, but its effects on stamina and blood flow are weak. Muscle pumps were higher than usual during our testing, which bodes well for the product’s potential to strengthen the mind-muscle link. We feel the cost is excessive in relation to the value provided. This may be a fantastic complement to your exercise routine if only the price were reduced. Because it doesn’t give you the energy or concentration boost you’d hope for before a workout, we can’t recommend this product.